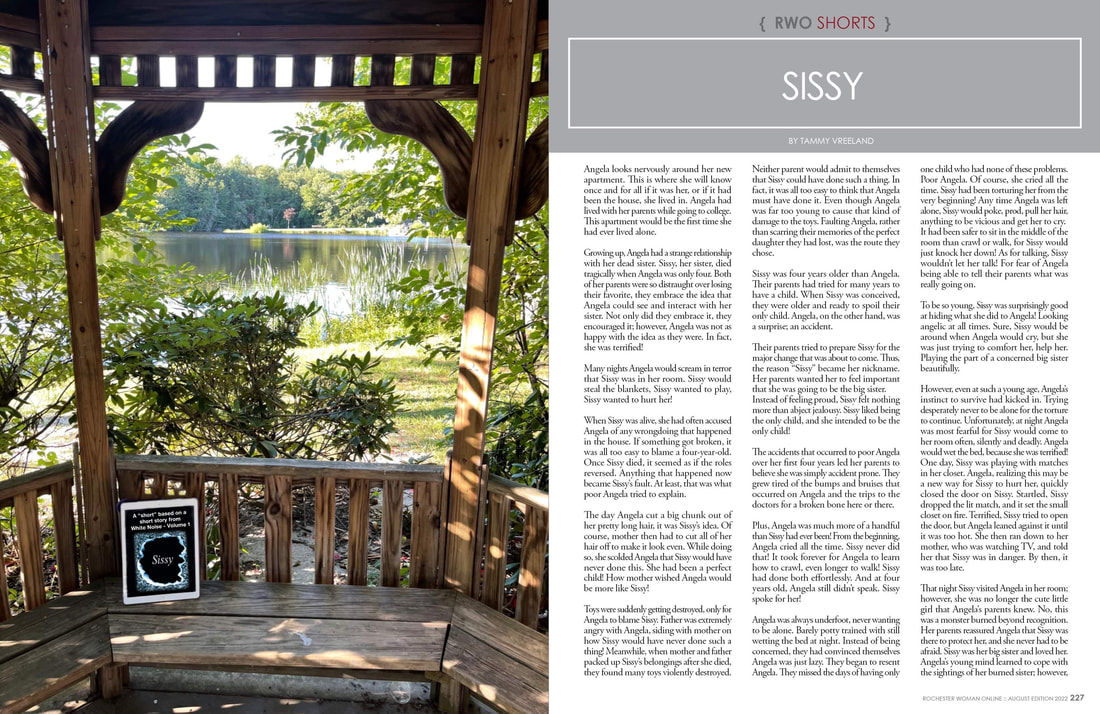 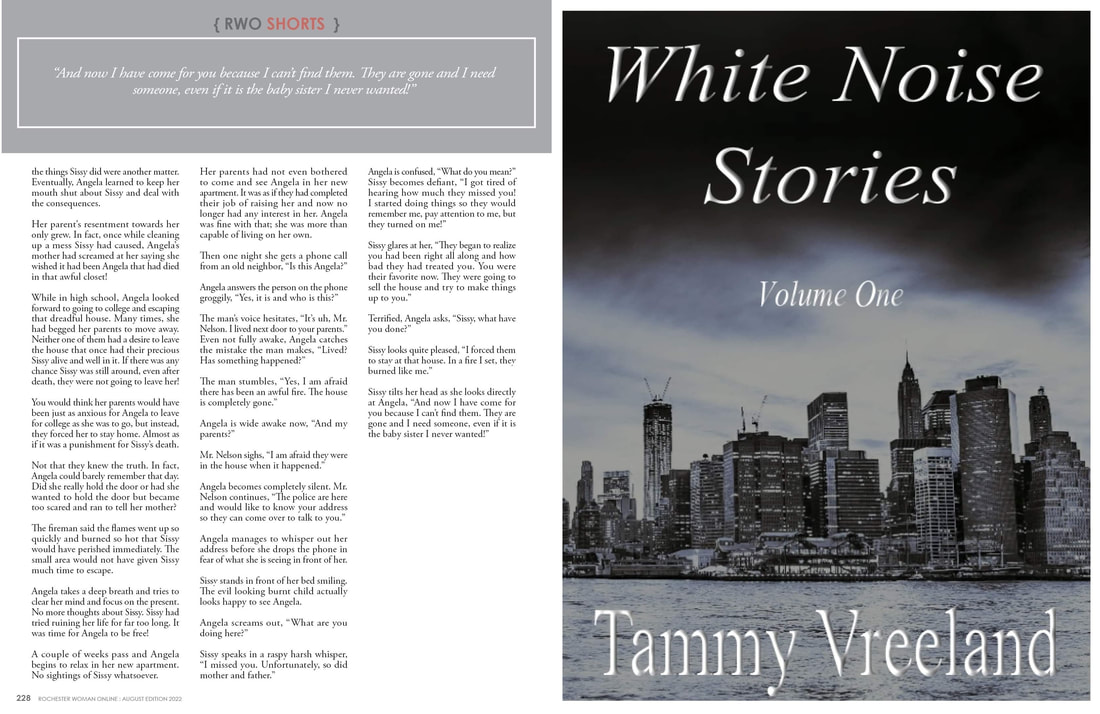 Angela looks nervously around her new apartment. This is where she will know once and for all if it was her, or if it had been the house, she lived in. Angela had lived with her parents while going to college. This apartment would be the first time she had ever lived alone.

Growing up, Angela had a strange relationship with her dead sister. Sissy, her sister, died tragically when Angela was only four. Both of her parents were so distraught over losing their favorite, they embrace the idea that Angela could see and interact with her sister. Not only did they embrace it, they encouraged it; however, Angela was not as happy with the idea as they were. In fact, she was terrified!

When Sissy was alive, she had often accused Angela of any wrongdoing that happened in the house. If something got broken, it was all too easy to blame a four-year-old. Once Sissy died, it seemed as if the roles reversed. Anything that happened now became Sissy’s fault. At least, that was what poor Angela tried to explain.

The day Angela cut a big chunk out of her pretty long hair, it was Sissy’s idea. Of course, mother then had to cut all of her hair off to make it look even. While doing so, she scolded Angela that Sissy would have never done this. She had been a perfect child! How mother wished Angela would be more like Sissy!

Toys were suddenly getting destroyed, only for Angela to blame Sissy. Father was extremely angry with Angela, siding with mother on how Sissy would have never done such a thing! Meanwhile, when mother and father packed up Sissy’s belongings after she died, they found many toys violently destroyed.

Neither parent would admit to themselves that Sissy could have done such a thing. In fact, it was all too easy to think that Angela must have done it. Even though Angela was far too young to cause that kind of damage to the toys. Faulting Angela, rather than scarring their memories of the perfect daughter they had lost, was the route they chose.

Sissy was four years older than Angela. Their parents had tried for many years to have a child. When Sissy was conceived, they were older and ready to spoil their only child. Angela, on the other hand, was a surprise; an accident.

Their parents tried to prepare Sissy for the major change that was about to come. Thus, the reason “Sissy” became her nickname. Her parents wanted her to feel important that she was going to be the big sister.
Instead of feeling proud, Sissy felt nothing more than abject jealousy. Sissy liked being the only child, and she intended to be the only child!

The accidents that occurred to poor Angela over her first four years led her parents to believe she was simply accident prone. They grew tired of the bumps and bruises that occurred on Angela and the trips to the doctors for a broken bone here or there.

Plus, Angela was much more of a handful than Sissy had ever been! From the beginning, Angela cried all the time. Sissy never did that! It took forever for Angela to learn how to crawl, even longer to walk! Sissy had done both effortlessly. And at four years old, Angela still didn’t speak. Sissy spoke for her!

Angela was always underfoot, never wanting to be alone. Barely potty trained with still wetting the bed at night. Instead of being concerned, they had convinced themselves Angela was just lazy. They began to resent Angela. They missed the days of having only one child who had none of these problems.

Poor Angela. Of course, she cried all the time. Sissy had been torturing her from the very beginning! Any time Angela was left alone, Sissy would poke, prod, pull her hair, anything to be vicious and get her to cry.
It had been safer to sit in the middle of the room than crawl or walk, for Sissy would just knock her down! As for talking, Sissy wouldn’t let her talk! For fear of Angela being able to tell their parents what was really going on.

To be so young, Sissy was surprisingly good at hiding what she did to Angela! Looking angelic at all times. Sure, Sissy would be around when Angela would cry, but she was just trying to comfort her, help her. Playing the part of a concerned big sister beautifully.

However, even at such a young age, Angela’s instinct to survive had kicked in. Trying desperately never to be alone for the torture to continue. Unfortunately, at night Angela was most fearful for Sissy would come to her room often, silently and deadly. Angela would wet the bed, because she was terrified!

One day, Sissy was playing with matches in her closet. Angela, realizing this may be a new way for Sissy to hurt her, quickly closed the door on Sissy. Startled, Sissy dropped the lit match, and it set the small closet on fire. Terrified, Sissy tried to open the door, but Angela leaned against it until it was too hot. She then ran down to her mother, who was watching TV, and told her that Sissy was in danger. By then, it was too late.

That night Sissy visited Angela in her room; however, she was no longer the cute little girl that Angela’s parents knew. No, this was a monster burned beyond recognition.

Her parents reassured Angela that Sissy was there to protect her, and she never had to be afraid. Sissy was her big sister and loved her.

Angela’s young mind learned to cope with the sightings of her burned sister; however, the things Sissy did were another matter. Eventually, Angela learned to keep her mouth shut about Sissy and deal with the consequences.

Her parent’s resentment towards her only grew. In fact, once while cleaning up a mess Sissy had caused, Angela’s mother had screamed at her saying she wished it had been Angela that had died in that awful closet!

While in high school, Angela looked forward to going to college and escaping that dreadful house. Many times, she had begged her parents to move away. Neither one of them had a desire to leave the house that once had their precious Sissy alive and well in it. If there was any chance Sissy was still around, even after death, they were not going to leave her!

You would think her parents would have been just as anxious for Angela to leave for college as she was to go, but instead, they forced her to stay home. Almost as if it was a punishment for Sissy’s death.

Not that they knew the truth. In fact, Angela could barely remember that day. Did she really hold the door or had she wanted to hold the door but became too scared and ran to tell her mother?

The fireman said the flames went up so quickly and burned so hot that Sissy would have perished immediately. The small area would not have given Sissy much time to escape.

Angela takes a deep breath and tries to clear her mind and focus on the present. No more thoughts about Sissy. Sissy had tried ruining her life for far too long. It was time for Angela to be free!

A couple of weeks pass and Angela begins to relax in her new apartment. No sightings of Sissy whatsoever.

Her parents had not even bothered to come and see Angela in her new apartment. It was as if they had completed their job of raising her and now no longer had any interest in her. Angela was fine with that; she was more than capable of living on her own.

Then one night she gets a phone call from an old neighbor, “Is this Angela?”

Angela answers the person on the phone groggily, “Yes, it is and who is this?”

The man’s voice hesitates, “It’s uh, Mr. Nelson. I lived next door to your parents.”

Even not fully awake, Angela catches the mistake the man makes, “Lived? Has something happened?”

The man stumbles, “Yes, I am afraid there has been an awful fire. The house is completely gone.”

Angela is wide awake now, “And my parents?”

Mr. Nelson sighs, “I am afraid they were in the house when it happened.”

Angela becomes completely silent. Mr. Nelson continues, “The police are here and would like to know your address so they can come over to talk to you.”

Angela manages to whisper out her address before she drops the phone in fear of what she is seeing in front of her.

Angela screams out, “What are you doing here?”

Sissy speaks in a raspy harsh whisper, “I missed you. Unfortunately, so did mother and father.”

Angela is confused, “What do you mean?”

Sissy becomes defiant, “I got tired of hearing how much they missed you! I started doing things so they would remember me, pay attention to me, but they turned on me!”

Sissy glares at her, “They began to realize you had been right all along and how bad they had treated you. You were their favorite now. They were going to sell the house and try to make things up to you.”

Terrified, Angela asks, “Sissy, what have you done?”

Sissy looks quite pleased, “I forced them to stay at that house. In a fire I set, they burned like me.”
​
Sissy tilts her head as she looks directly at Angela, “And now I have come for you because I can’t find them. They are gone and I need someone, even if it is the baby sister I never wanted!”