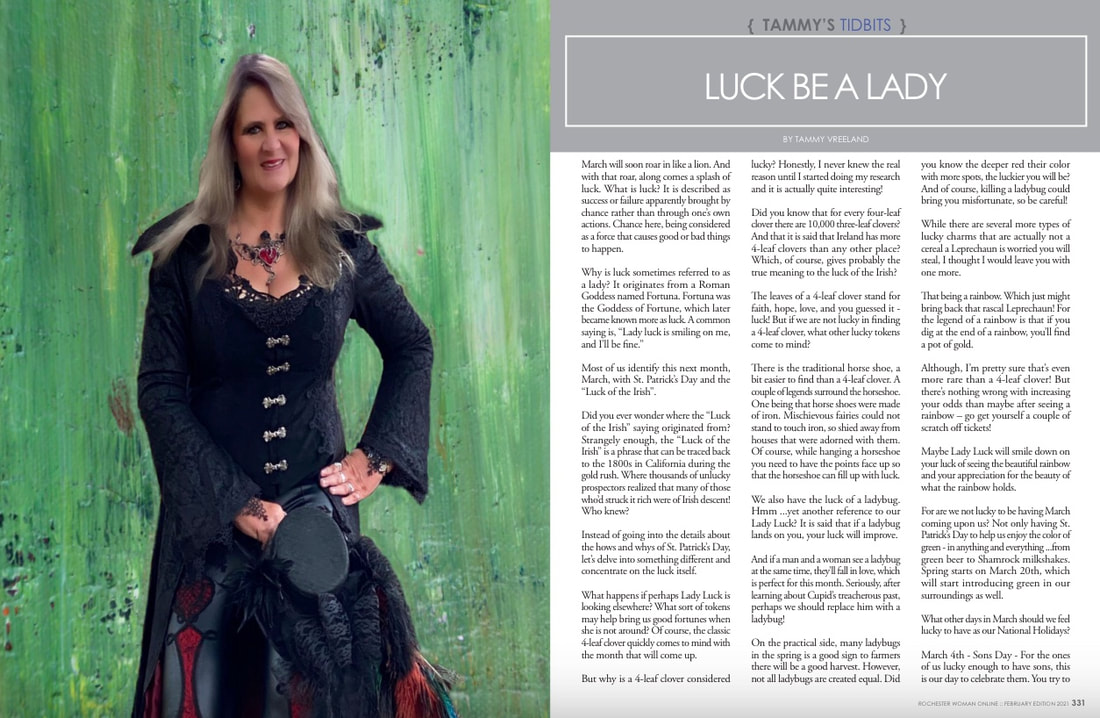 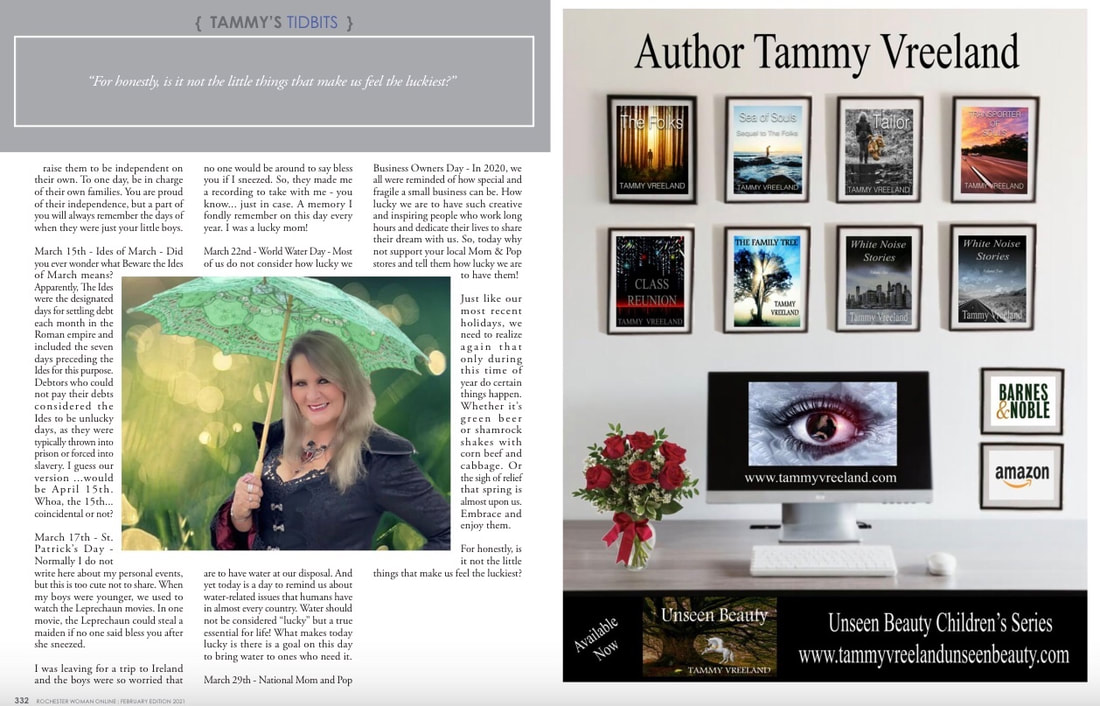 March will soon roar in like a lion. And with that roar, along comes a splash of luck. What is luck? It is described as success or failure apparently brought by chance rather than through one's own actions. Chance here, being considered as a force that causes good or bad things to happen.

Why is luck sometimes referred to as a lady? It originates from a Roman Goddess named Fortuna. Fortuna was the Goddess of Fortune, which later became known more as luck. A common saying is, “Lady luck is smiling on me, and I’ll be fine.”

Most of us identify this next month, March, with St. Patrick’s Day and the “Luck of the Irish”.

Instead of going into the details about the hows and whys of St. Patrick’s Day, let’s delve into something different and concentrate on the luck itself.

What happens if perhaps Lady Luck is looking elsewhere? What sort of tokens may help bring us good fortunes when she is not around? Of course, the classic 4-leaf clover quickly comes to mind with the month that will come up.

But why is a 4-leaf clover considered lucky? Honestly, I never knew the real reason until I started doing my research and it is actually quite interesting!

Did you know that for every four-leaf clover there are 10,000 three-leaf clovers? And that it is said that Ireland has more 4-leaf clovers than any other place? Which, of course, gives probably the true meaning to the luck of the Irish?

The leaves of a 4-leaf clover stand for faith, hope, love, and you guessed it - luck! But if we are not lucky in finding a 4-leaf clover, what other lucky tokens come to mind?

There is the traditional horse shoe, a bit easier to find than a 4-leaf clover. A couple of legends surround the horseshoe. One being that horse shoes were made of iron. Mischievous fairies could not stand to touch iron, so shied away from houses that were adorned with them. Of course, while hanging a horseshoe you need to have the points face up so that the horseshoe can fill up with luck.

We also have the luck of a ladybug. Hmm ...yet another reference to our Lady Luck? It is said that if a ladybug lands on you, your luck will improve.

And if a man and a woman see a ladybug at the same time, they’ll fall in love, which is perfect for this month. Seriously, after learning about Cupid’s treacherous past, perhaps we should replace him with a ladybug!

On the practical side, many ladybugs in the spring is a good sign to farmers there will be a good harvest. However, not all ladybugs are created equal. Did you know the deeper red their color with more spots, the luckier you will be? And of course, killing a ladybug could bring you misfortunate, so be careful!

While there are several more types of lucky charms that are actually not a cereal a Leprechaun is worried you will steal, I thought I would leave you with one more.

That being a rainbow. Which just might bring back that rascal Leprechaun! For the legend of a rainbow is that if you dig at the end of a rainbow, you’ll find a pot of gold.

Although, I’m pretty sure that’s even more rare than a 4-leaf clover! But there’s nothing wrong with increasing your odds than maybe after seeing a rainbow – go get yourself a couple of scratch off tickets!

Maybe Lady Luck will smile down on your luck of seeing the beautiful rainbow and your appreciation for the beauty of what the rainbow holds.

For are we not lucky to be having March coming upon us? Not only having St. Patrick’s Day to help us enjoy the color of green - in anything and everything ...from green beer to Shamrock milkshakes. Spring starts on March 20th, which will start introducing green in our surroundings as well.

What other days in March should we feel lucky to have as our National Holidays?

March 4th - Sons Day - For the ones of us lucky enough to have sons, this is our day to celebrate them. You try to raise them to be independent on their own. To one day, be in charge of their own families. You are proud of their independence, but a part of you will always remember the days of when they were just your little boys.

March 15th - Ides of March - Did you ever wonder what Beware the Ides of March means? Apparently, The Ides were the designated days for settling debt each month in the Roman empire and included the seven days preceding the Ides for this purpose. Debtors who could not pay their debts considered the Ides to be unlucky days, as they were typically thrown into prison or forced into slavery. I guess our version ...would be April 15th. Whoa, the 15th... coincidental or not?

March 17th - St. Patrick’s Day - Normally I do not write here about my personal events, but this is too cute not to share. When my boys were younger, we used to watch the Leprechaun movies. In one movie, the Leprechaun could steal a maiden if no one said bless you after she sneezed.

I was leaving for a trip to Ireland and the boys were so worried that no one would be around to say bless you if I sneezed. So, they made me a recording to take with me - you know... just in case. A memory I fondly remember on this day every year. I was a lucky mom!

March 22nd - World Water Day - Most of us do not consider how lucky we are to have water at our disposal. And yet today is a day to remind us about water-related issues that humans have in almost every country. Water should not be considered “lucky” but a true essential for life! What makes today lucky is there is a goal on this day to bring water to ones who need it.

March 29th - National Mom and Pop Business Owners Day - In 2020, we all were reminded of how special and fragile a small business can be. How lucky we are to have such creative and inspiring people who work long hours and dedicate their lives to share their dream with us. So, today why not support your local Mom & Pop stores and tell them how lucky we are to have them!

Just like our most recent holidays, we need to realize again that only during this time of year do certain things happen. Whether it’s green beer or shamrock shakes with corn beef and cabbage. Or the sigh of relief that spring is almost upon us. Embrace and enjoy them.

For honestly, is it not the little things that make us feel the luckiest?
Tammy's Tidbits