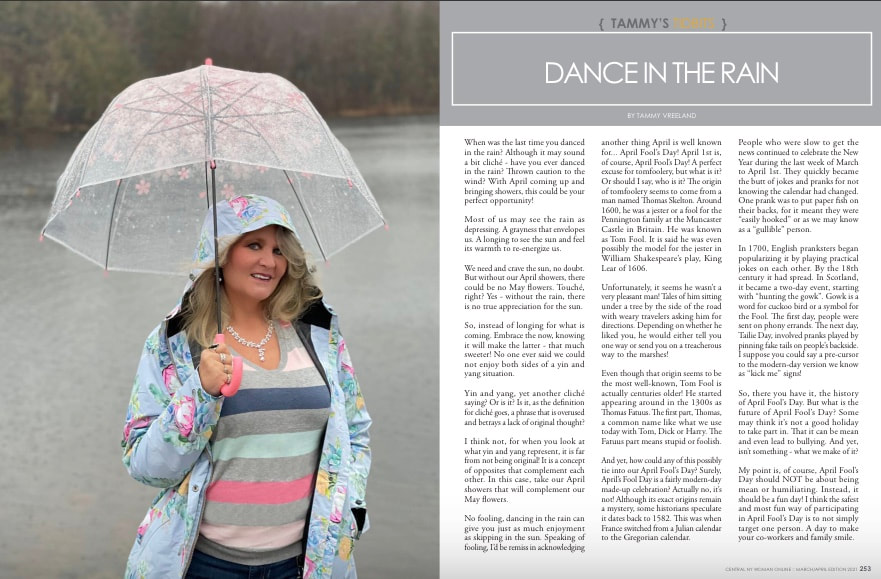 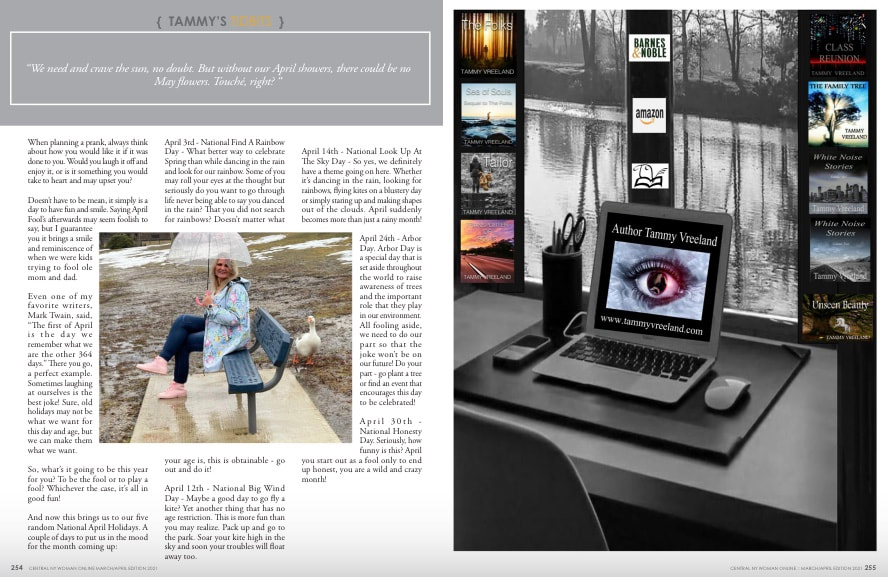 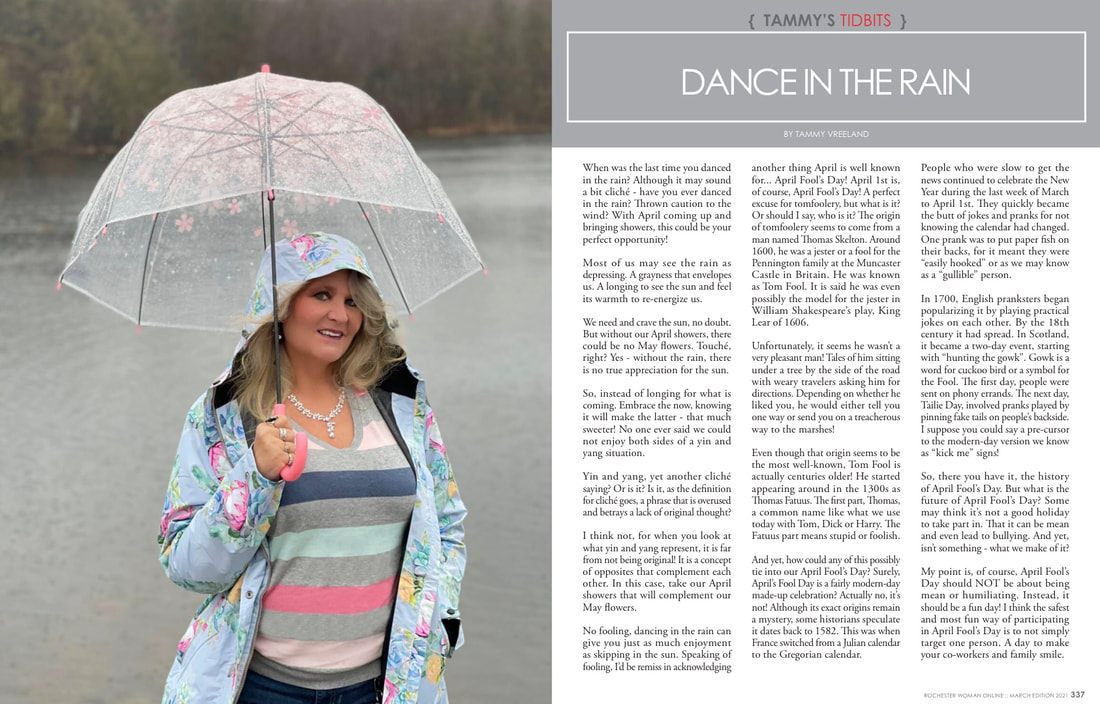 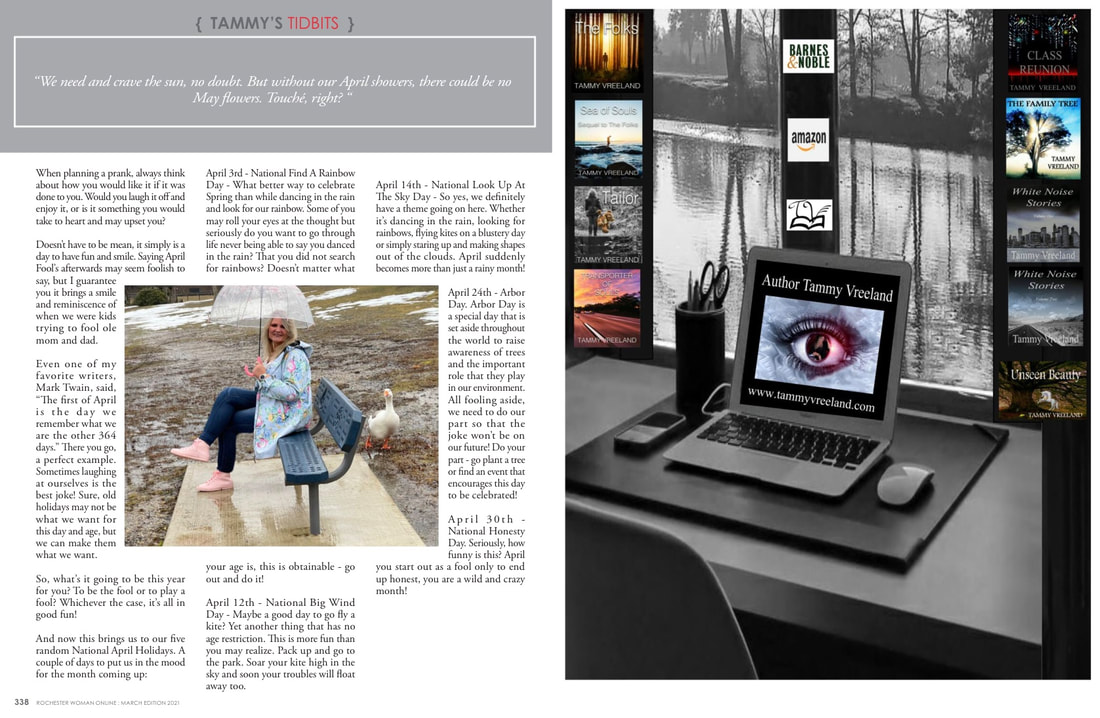 Most of us may see the rain as depressing. A grayness that envelopes us. A longing to see the sun and feel its warmth to re-energize us.

We need and crave the sun, no doubt. But without our April showers, there could be no May flowers. Touché, right? Yes - without the rain, there is no true appreciation for the sun.

So, instead of longing for what is coming. Embrace the now, knowing it will make the latter - that much sweeter! No one ever said we could not enjoy both sides of a yin and yang situation.

Yin and yang, yet another cliché saying? Or is it? Is it, as the definition for cliché goes, a phrase that is overused and betrays a lack of original thought?

I think not, for when you look at what yin and yang represent, it is far from not being original! It is a concept of opposites that complement each other. In this case, take our April showers that will complement our May flowers.

No fooling, dancing in the rain can give you just as much enjoyment as skipping in the sun. Speaking of fooling, I’d be remiss in acknowledging another thing April is well known for... April Fool’s Day! April 1st is, of course, April Fool’s Day! A perfect excuse for tomfoolery, but what is it?

Or should I say, who is it? The origin of tomfoolery seems to come from a man named Thomas Skelton. Around 1600, he was a jester or a fool for the Pennington family at the Muncaster Castle in Britain. He was known as Tom Fool. It is said he was even possibly the model for the jester in William Shakespeare’s play, King Lear of 1606.

Unfortunately, it seems he wasn’t a very pleasant man! Tales of him sitting under a tree by the side of the road with weary travelers asking him for directions. Depending on whether he liked you, he would either tell you one way or send you on a treacherous way to the marshes!

Even though that origin seems to be the most well-known, Tom Fool is actually centuries older! He started appearing around in the 1300s as Thomas Fatuus. The first part, Thomas, a common name like what we use today with Tom, Dick or Harry. The Fatuus part means stupid or foolish.

And yet, how could any of this possibly tie into our April Fool’s Day? Surely, April’s Fool Day is a fairly modern-day made-up celebration? Actually no, it’s not! Although its exact origins remain a mystery, some historians speculate it dates back to 1582. This was when France switched from a Julian calendar to the Gregorian calendar.

People who were slow to get the news continued to celebrate the New Year during the last week of March to April 1st. They quickly became the butt of jokes and pranks for not knowing the calendar had changed. One prank was to put paper fish on their backs, for it meant they were “easily hooked” or as we may know as a “gullible” person.

In 1700, English pranksters began popularizing it by playing practical jokes on each other. By the 18th century it had spread. In Scotland, it became a two-day event, starting with “hunting the gowk”. Gowk is a word for cuckoo bird or a symbol for the Fool. The first day, people were sent on phony errands. The next day, Tailie Day, involved pranks played by pinning fake tails on people’s backside. I suppose you could say a pre-cursor to the modern-day version we know as “kick me” signs!

So, there you have it, the history of April Fool’s Day. But what is the future of April Fool’s Day? Some may think it’s not a good holiday to take part in. That it can be mean and even lead to bullying. And yet, isn’t something - what we make of it?

My point is, of course, April Fool’s Day should NOT be about being mean or humiliating. Instead, it should be a fun day! I think the safest and most fun way of participating in April Fool’s Day is to not simply target one person. A day to make your co-workers and family smile.

When planning a prank, always think about how you would like it if it was done to you. Would you laugh it off and enjoy it, or is it something you would take to heart and may upset you?

Doesn’t have to be mean, it simply is a day to have fun and smile. Saying April Fool’s afterwards may seem foolish to say, but I guarantee you it brings a smile and reminiscence of when we were kids trying to fool ole mom and dad.

Even one of my favorite writers, Mark Twain, said, “The first of April is the day we remember what we are the other 364 days.” There you go, a perfect example. Sometimes laughing at ourselves is the best joke! Sure, old holidays may not be what we want for this day and age, but we can make them what we want.

So, what’s it going to be this year for you? To be the fool or to play a fool? Whichever the case, it’s all in good fun!

And now this brings us to our five random National April Holidays. A couple of days to put us in the mood for the month coming up:

April 3rd - National Find A Rainbow Day - What better way to celebrate Spring than while dancing in the rain and look for our rainbow. Some of you may roll your eyes at the thought but seriously do you want to go through life never being able to say you danced in the rain? That you did not search for rainbows? Doesn’t matter what your age is, this is obtainable - go out and do it!

April 12th - National Big Wind Day - Maybe a good day to go fly a kite? Yet another thing that has no age restriction. This is more fun than you may realize. Pack up and go to the park. Soar your kite high in the sky and soon your troubles will float away too.

April 14th - National Look Up At The Sky Day - So yes, we definitely have a theme going on here. Whether it’s dancing in the rain, looking for rainbows, flying kites on a blustery day or simply staring up and making shapes out of the clouds. April suddenly becomes more than just a rainy month!

April 24th - Arbor Day. Arbor Day is a special day that is set aside throughout the world to raise awareness of trees and the important role that they play in our environment. All fooling aside, we need to do our part so that the joke won’t be on our future! Do your part - go plant a tree or find an event that encourages this day to be celebrated!

April 30th - National Honesty Day. Seriously, how funny is this? April you start out as a fool only to end up honest, you are a wild and crazy month!

Yes, there will be rain. Even storms we may not feel like we can weather. But go ahead and dance in the rain. Whether it be metaphorical or an actual dance to the tune of nature, embrace it. Conquer it. For no one can see tears in the rain - it’s ok to let them out.

And just like Spring that is upon us, the rain and tears will not be there to take us down but flow to make things grow. Before you know it, the sun comes out. But to truly appreciate the sun, we need to embrace the rain and own it.

You are no fool, and yet once in a while… it does the soul good to play a fool. There can be no yin without yang.
Tammy's Tidbits & Tantalizing Days